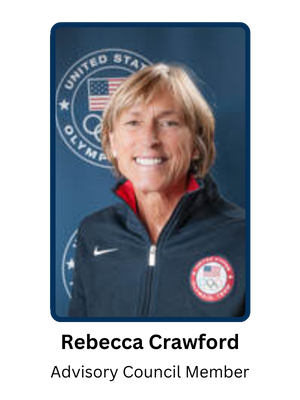 Rebecca Crawford is the senior director of Games Operations and serves as the Games Director for United States teams at the Summer Olympic, Youth Olympic and World Beach Games, overseeing the USOPC’s relationship with Games Local Organizing Committees, collaborating with Sport Performance, Events &; Logistics, Athlete Safety &; Security, Sports Medicine and various other USOPC divisions to ensure an optimal performance environment for Team USA delegations on the ground at Games. Throughout her career at the USOPC, Rebecca has served in various Games leadership roles for 22 Summer &; Winter Olympic, Paralympic, Pan American, Parapan American, Youth Olympic and World Beach Games. From July 2000 to September 2006, Crawford served as a Director in Sport Performance, overseeing collaboration with USOPC Sports Science, Medicine and Technology, to execute on USOPC business operations partnerships, high performance planning, athlete selection
procedures for Games and resource allocation across 15 Winter, Summer and Pan American National Governing Bodies of Sport (NGBs).
​
​Rebecca began her career at the USOPC in 1995 as Assistant Director of the Grants &; Planning Division, working with NGBs on high performance planning and allocating peak performance grants designed to give Team USA athletes and NGBs the best chance of success at international competitions and on the world stage at the Olympic Games. Prior to joining the USOPC, Rebecca was the National Teams Director for U.S. Rowing in Indianapolis, Indiana and served as a member of the Organizing Committee for the 1994 World Rowing Championships. Prior to U.S. Rowing, Rebecca was the Director of Youth Development at the National Institute for Fitness and Sport in Indianapolis. Rebecca received her B.S at Missouri University in Springfield and her M.S. at Indiana University in Bloomington. As a varsity collegiate athlete, she played volleyball and competed in track & field.